It was second time lucky for Afrobeats star Burna Boy who landed a Grammy award for his album ‘Twice As Tall’ at the ceremony. Burna, real name Damini Ogulu, missed out to veteran Beninese singer, Angelique Kidjo at the 2020 awards. As he accepted the Best Global Music Album award from his home in Lagos, Nigeria, Burna, 29, declared: “This is a big win for my generation of Africans all over the world.”

“This should be a lesson to every African out there: No matter where you are, no matter what you plan to do, you can achieve it…,” he added.
Another Nigerian winner was artist Wizkid, 30, who was recognized for his collaboration with US singer Beyonce on ‘Brown Skin Girl’ which won the Best Music Video at the 63rd Grammy Awards.
Beyoncé’s album “The Lion King: The Gift” — which she described as her “Love letter to Africa”– features collaborations with Afrobeats artists including Shatta Wale and Tiwa Savage. For music industry watchers such as Aibee Abidoye, these award wins signals that Afrobeats music “is here to stay.” Abidoye, a Nigerian music business executive, told CNN Monday that Burna Boy’s Grammy win is indeed a big win for Africa. “The Grammy is the biggest award globally that people recognize and most musicians look up to…with this win, African music — Afrobeats is here to stay as an acceptable genre of music,” said Abidoye, who is Executive Vice President at Nigerian record label Chocolate City.
Afrobeats has struck a chord with youth around the globe. D’Banj’s hit “Oliver Twist” was one of the first to breakthrough when it reached number nine in the UK charts in 2012. Drake and WizKid’s “One Dance” topped the US Billboard Hot 100 chart for 10 consecutive weeks following its release in May 2016 and the UK announced the launch of Britain’s first-ever Afrobeats singles chart in 2020.

Pioneered by a legend

The Afrobeats genre popularized by Burna Boy, Wizkid and Davido has its origins in the Afrobeat genre pioneered by the late Fela Anikulapo Kuti — who was recently nominated for induction into the Rock and Roll Hall of Fame. Fela’s sons Femi and Seun Kuti are successful musicians in their own right and have also been nominated at different times for the Grammy but without a win. “When you think about Afrobeat, the original genre — that’s from the Kutis, who actually have been nominated for years, it has never really been accepted as a thing. It has always been sort of sidelined. But what we’re seeing now is an acceptance of the difference in the music,” Abidoye said.
“They couldn’t ignore Burna Boy… people think that he really epitomizes Afrobeats, so it makes sense that he would win,” she added. 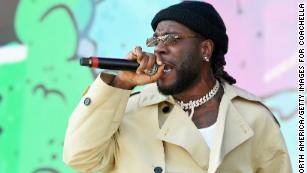 How ‘African Giant’ Burna Boy became a roaring success
Burna Boy has parallels to Fela Kuti. Just like Kuti, he has been vocal about social issues across the African continent while railing against the violent intimidation of citizens by politicians and security agents in his home country.
He debuted in 2013 with the release of his first album ‘LIFE,’ followed by ‘Redemption’ in 2015, ‘Outside’ in 2018, ‘African Giant’ in 2019 and Grammy-winning album ‘Twice as Tall’ in 2020. Burna Boy’s ‘Anybody’ track, from his ‘African Giant’ album was listed among former US President Barack Obama’s favourite songs of 2019 and he won the BET Best International Act in 2020.

‘Africa on the map’

Talent manager, Kimani Moore, told CNN that Burna Boy’s win will inspire other African artistes to create projects that appeal to global audiences. “He has set the pace…for the longest time, we (Africans) are seen on the same level as everybody else,” Moore said, adding that Burna Boy has “taken Afrobeats to the world.” Others see Burna’s win as paving the way for a new generation of African artists who are creating their own unique sounds. 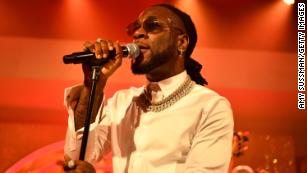 Nigeria’s Burna Boy featured on US inauguration playlist
Agnes Nonsizi, a Kenyan entertainment publicist told CNN that Burna Boy’s feat at the Grammys has “put Africa on the map. If he continues with the same pace, he might be able to replicate the same heroics next year,” Nonsizi said. “But if he doesn’t, I would love to see another African artiste, maybe Sauti Sol on the same platform,” she added. In a statement Monday, the Nigerian government congratulated Burna Boy and Wizkid for achieving the rare feat at the Grammys. The country’s Ministry for Information and Culture said in a statement on Twitter that the awards “represented a global endorsement for the Afrobeat genre of music that has propelled Nigeria’s increasing dominance of the music world.”

Even before he attained global fame, Burna Boy was proclaiming himself an ‘African Giant.’ He took Coachella organizers to task when they wrote his name in small fonts in the list of performers for 2019. Burna Boy complained about his name being “so small” on the festival poster. “I don’t appreciate the way my name is written so small on your bill. I am an AFRICAN GIANT and will not be reduced to whatever that tiny writing means. Fix things quick please,” he wrote.
This Grammy win will surely guarantee that Burna Boy’s name will be emblazoned in bold letters in festivals around the world. By Nimi Princewill, CNN
Main Photo: Burna Boy /GQ