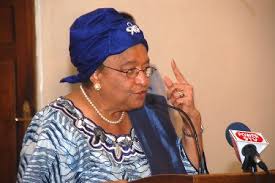 President Ellen Johnson-Sirleaf has urged Liberians to pay their taxes to enable government raise the needed funds to address several national priorities here. The president said for government to address national issues such as immunization, the tax base of the country needs to be increased.

Speaking Thursday at the John F. Kennedy Medical Center when she launched the Pneumococcal Conjugate Vaccine (PCV) for children under one-year-old, She noted that Liberians do not like to pay taxes and that it is about time that Liberians demonstrated willingness to pay their taxes, if government should raise the resources needed to provide better health services, good roads and other social services derived from the taxes citizens pay.

Madam Sirleaf said government will embark on a campaign to ensure that all Liberians pay their taxes, adding that if people pay their taxes they can advocate for good roads and other benefits.

The President also challenged the Ministry of Health and Social Welfare and health workers to reach every child with the new vaccine across the country, particularly in the rural parts.

She called for a mechanism to create awareness for mothers to bring their babies to be vaccinated at the three levels of the pneumococcal vaccine. The Pneumococcal Conjugate Vaccine protects children from contracting pneumonia and other sicknesses such as meningitis or stiffness of the neck.###New Dawn