Fifa World Cup qualifications, especially if you live in Africa, where the sport enjoys a near religious following can be a spectacle. We are not talking about North America here that has basketball competing with baseball and football, [oops soccer as they say in the United States]. Or the Indian sub-continent that celebrates cricket to a passion. No, but the point here is football in Africa enjoys a near complete domination across the continent, so much so that Fifa qualifications as we will see this weekend are source of pride,  and battles between nations! It is already happening in Kampala as we speak. As early as Tuesday this week, Liberia,  determined to show their East African friends they meant business stormed Kampala “with George Weah in tow!” Weah rarely touches or talked Liberian football these days—remember he is a now politician, but he is there in Kampala as we speak.

There has been much talking in the Ugandan capital this week already. Weah told the Ugandan media he was there to inspire the Lone Stars to victory also complaining of unfair treatment the last time he was there, but more than that, he suited up in cleats and trained with the young guns; he could be seen giving instructions. The stakes in Kampala are high. The coaches are talking tough also.

Jericho Nagbe:  “For us, we are unknown quantities. Not many can predict our type of play or strategy. Among all the teams you have beaten here, you know something, and [at] times the knitty gritty about them [but you know nothing about us].”  Uganda Coach Milutin ‘Micho’ Sredojevic: “Look, we respect them as a team, but more than respect them, we must have self-respect and to focus on our self. I’m focusing on our team and on our players I’m not thinking about Liberia. I’m concentrating on what we can do best and where we can improve.”

Of course national team coaches must justified their huge salaries and bonuses; they must say the right things to the media. But what no one cannot change, comes when the final whistle blows and the results are there for all to see. But the players have joined in too—talking about what a great game it will be and how they are certain about victory for their respective squads— both teams are confident.

Uganda is enjoying an unbeaten running home record since 2005, when they lost to South Africa, through a Benni McCarthy’s penalty spot kick. Mandela Namboole stadium has been a fortress for the Cranes, but it comes alive this weekend, can Liberia spoil the party…?

That question will be answer after 90mins and stoppage time. Liberia has a youthful team that is really good as the East Africans will discovered this when the Lone Stars take on the Cranes. The team has been building since 2010, when Hungarian coach Bertalan Bicskei was hired, nobody talk about him these days, but if this current squad finds success, say analysts he is part of the reason. He assembled a really good team that show potential when Liberian despite not parading a star studded players troubled the Nigerian Super Eagles in Monrovia to a 2-2 draw last year, going on to beat Ghana 2-0 in a friendly, then crashed in Calabar to a 6-1 drubbing from the Eagles. The team has since regrouped under Frank Jericho Nagbe, “Baba the Wizard,” a five times Liberian FA decorated coach who along with George Weah almost qualified the Lone Stars for the 2002 World Cup. Predictions are tricky and sentimental, let’s give it a try,  here are the players to watch.

Patrick Wleh has a really bright future ahead of him when you considered that he is only 22 years old. When Liberia is being discussed, everyone talked about another good player and the team skipper Anthony Laffor, but Wleh has kept quiet and his boots has been doing the talking. On the team though, is another protégé Sekou Jabateh Oliseh, but it is Wleh who’s nearly as good, if not better. He plays in Asia but no one expects him to stay there long enough when you discover the goals he has scored— robbing goalies from keeping clean slates and sheets. He is only expected to grow judging from his production. Why Liberian sports commentators called him “Ronaldinho,” could be anyone’s guess and imagination. Those are huge foot steps to follow and name tag to carry around, as any football pundit and fan will tell you, but Wleh don’t seems to mind at all.

Stat: He played in Israel for Hapoel for one season, 2008-2009 scoring 23 goals, before that he played in the Liberian league the previous season for LISCR pouring in 25 goals in 23 appearances. Wleh is a demon when he approaches the goal mouth. Now in his third season in Malaysia since 2009 the goal puncher has scored 52 goals! For country, he has risen to the occasion every time he has been called to national duty, scoring 10 goals since 2010, 6 for the under 23 and 4 for the national team, he ‘gotta be darn good’ to be able to do that, you bet. 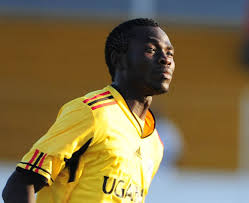 Emmanuel Okwi is young, and his talent innumerable. It’s a shame that such a player of his caliber is still playing in the Tunisian league when he should be doing bigger things in the more competitive leagues in Europe and elsewhere. In Okwi, Uganda has a legitimate star player that is expected to trouble the Liberian defense. Had he not wasted his really good chances at the Monrovia Sports Stadium a fortnight ago— four clear opportunities at goal mouth in total, Liberia, despite dominating both halves would have had nothing to celebrate as they travel to Kampala for this weekend duel.

Stat: At age 20 he is young and vibrant. He scored 13 goals for the Uganda Cranes, since 2009. Also at SC Villa where he spent one season from 2009 to 20010, the Ugandan born magician rained in 13 goals, in 40 appearances. But when you also considered that that his lightening boots hit the back of the net 26 times in 72 appearances for Simba FC from 2010 to 2013, you have to recognize that a star is on the rise. While he currently plays in Tunisia for ES Sahel, and has yet to score for them, you can’t take nothing away from Okwi, Liberia should watch him, or else they would be flying back home to Monrovia with tears in their eyes.

If Carol Radull [The Star, Kenya] and Ismael Kiyonga [Kawowo Sports, Uganda] are right, this is a 2-1 contest with the Cranes going home with smiles on their faces. But predictions are hard to punctuate, especially if you have a side to pick, and especially when a national team that represents your own country is playing.

But this is what you can expect: Uganda should come into his match feeling really good, considering their home record is solid and given that the 45 thousand Mandela Stadium will be a cheering squad of 45 thousand fans…are there any Liberians living in Kampala, —ohh just two.

Look to see Liberia moving the ball swiftly and playing in the midfield where they are the strongest. Liberian football is not like Nigeria that thrives on the wings and on the fringes of the field as the ball moves towards the goal mouth, it is midfield oriented with distribution going north and south or east and west. This is a game that Liberia will want to dominate in the middle as far as possessions are concerned and then punished Uganda when they can pick their chances. Expect Uganda to look for penetration with Emmanuel Okwi and Geoffrey Massa up front as they torment the Lone Stars defense looking for an early goal that they can defend, as they do all within their might to frustrate the West Africans. It’s going to be an exciting game that will worth the watch and the tickets purchased.