HARARE, Zimbabwe, AP — The southern African nation of Zimbabwe is sending a Black swimmer to the Olympics, the first from her country to go the Games. Seventeen-year-old Donata Katai won African youth titles and broke youth records once held by two-time Olympic champion Kirsty Coventry, who is not only Zimbabwe’s most successful swimmer but also Africa’s most decorated Olympian.

Tokyo is probably too early for the teenager to succeed Coventry in the way she really wants, by stepping onto the Olympic podium. But, for now, Katai does represent a deeper breakthrough for Zimbabwe. Her country is 99% Black and it’s taken until 2021 for a Black swimmer to represent Zimbabwe at the Olympics.

Simone Manuel’s gold medal in the 100-meter freestyle at the last Olympics in Rio de Janeiro was a seminal moment for Black swimmers. But the American’s success also sparked a conversation about why Black swimmers are so underrepresented. That’s historically been the case in southern Africa, where the most successful swimmers — like Coventry and South Africans Chad le Clos and Cameron van de Burgh — are all white. It’s maybe starker because they come from majority-Black countries.

But while swimming in the United States might be still struggling to diversify, Katai said it isn’t anymore in Zimbabwe. “There’s a lot of people of colour that take part in the sport (in Zimbabwe),” Katai said. “It’s kind of becoming normal for me in Zimbabwe.

Katai’s story is also very different from another Black African swimmer. Eric Moussambani of Equatorial Guinea gained brief worldwide fame, and the ironic nickname Eric the Eel, for being so bad at the 2000 Sydney Olympics. That stereotype is definitely not applicable here.

Katai has been swimming competitively since, at the age of 6, she realized she was pretty good at it. She’s been tracked after her talent peaked the interest of some of the country’s top coaches at the age of 8. Her family is solidly middle class, her current coach, Kathy Lobb, stressed. She is not underprivileged. And she’s the first swimmer the veteran coach has taken all the way to the Olympics.

“The best I’ve done is world champs and African Games. So for me this is the ultimate,” Lobb said. “Its every coach’s dream to have a swimmer coming through and taking them to the Olympics.” 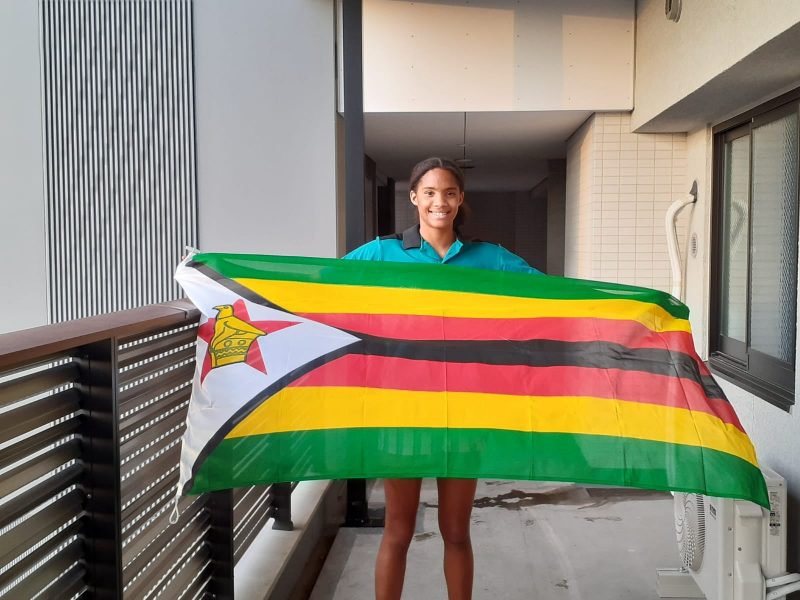 Of all the comparisons, Katai is quite happy with the Coventry one.

Katai and Coventry know each other, but not very well. They’ve only spoken a couple of times at meets, Katai said, but Coventry has been completely supportive. And it was “an achievement to be following in her footsteps,” Katai said.

Tokyo is the next step for Katai and it’s pure excitement now after the dream to compete against the world’s best was delayed a year by the coronavirus pandemic.

“I think it’s (the Olympics) going to be like sort of a movie,” Katai said. “It’s going to be unreal. Being around a lot of people I watch on TV, look up to in a way, then be right there in front of me, being able to watch them.

“I think it’s going to be an unreal experience for me, but definitely one I’m looking forward to.”

There’s an element of star-struck teenager there, but that’s OK. And Lobb isn’t putting any pressure on Katai in Tokyo, she said.

Coventry was also 17 when she swam at her first Olympics in 2000. She didn’t win a medal, but she returned four years later to earn a gold, a silver and a bronze and start that record-breaking haul for Africa. Enock Muchinjo, The Associated Press