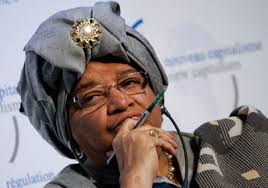 Issue #one: “Fired Or Resigned? Leroy Urey Bows Out AFTER His Replacement Was Announced”: Daily Observer Online

2] Isn’t this the same Carbah who attempted to bribe GAC [General Auditing Commission] auditors during an audit of NACCCORP? Re: Frontpage Africa Online “US$100K “Bribery” To Liberian Auditors Fails; Financial Malpractices at NASSCORP…”

1) Isn’t this the same crook, oops, I mean Carbah who was asked to resign for “gross indiscretion in financial management ?”   Re: “The  Executive Mansion’s press release, September 2012.”

You see, those people at the Executive Mansion like to beat around the bush because they know too much book. Instead of saying Carbah was fired because he’s a crook, they say Carbah resigned for “gross indiscretion in financial management!

But the burning question is: Should the President rehire someone who she asked to resign because of “gross indiscretion in financial management”?

If Ellen wants to hire this old crook to take care her chicken farm, that’s fine with me….But there’s no way in hell Carbah should be Chairman of the Board at the National Housing Authority!  Are the Senators listening?

Something seems to be off here: Did anyone else notice the ironic connection between INCHR Chairman’s [Leroy Urey] so called resignation and his termination?  [Re “Fired Or Resigned? Leroy Urey Bows Out AFTER His Replacement Was Announced”, Daily Observer Online]

According to the Online Daily Observer, “barely 12 hours following [the] announcement [of Leroy’s replacement], the Executive Mansion announced [Tuesday] that President Ellen Johnson Sirleaf had accepted the resignation of Cllr. Urey.” …Hmmm, How strange…

But at this point, who the hell cares whether Urey resigned or was fired? I don’t…

Look, this is the same Urey who assaulted a police officer for trying to stop him from driving while under the influence –DUI. Re: “Urey Brothers Assault Police Traffic Chief”, Daily Observer Online, September 26, 2005

By the way, Urey was very disrespectful to the police traffic chief who was just doing his job. When the police chief asked Urey to say the A-B-C backwards [sobriety test], Urey kept asking the cop, “DO, DO YOU, YOU [hiccup] KNOW WHO I AM [10 times]?” Finally, the officer responded by saying “No, I don’t need to know who the hell you’re! You’re a drunk!”

Urey’s DUI case has “died” since then!

In other words, if you’re on the UN Travel Ban list and you’re caught entering or transiting through any other UN member territory, they should ship your ass right back to Liberia!

But Cllr. Urey says it’s “unconstitutional” for another country to ship you back home (Liberia)! Hey, did Cllr. Urey skip his Constitutional Law class to chase behind those country women in Careysburg?

Urey has proven to be unsuited for the job! Ellen should’ve fired his a.s long time ago!

January 25, 2021 admin2Africa, AU, Conflict
Editorial—-   Seven years ago African leaders committed themselves towards an end to armed conflict. At the 50th anniversary celebration that...
Public Policy

THE DEPUTY DEPUTY SPEAKER ELECT MUST STEP DOWN IMMEDIATELY!